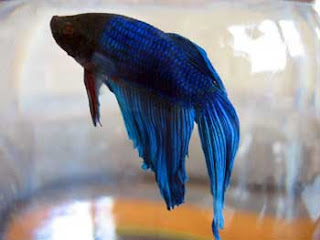 Our fish Mr. Blue died today. He was our office mascot & he kicked fin! He was the spunkiest fish I have ever seen. Mr. Blue was a Beta Fish & was the most handsome of all. As most Beta Fish are fighting fish, he was no different. He was so gregarious in his fighting ways, whenever we would put a blue pen up to his fishbowl; he would puff up all big & chase after the pen. He knew his territory & was not afraid to defend it. Unfortunately Mr. Blue came down with a tumor of some sort and has sadly left us with only his memories. So today, February 18, 2009 I am dedicating to our late fish, Mr. Blue.
Posted by Leo The Lioness at 9:47 AM No comments:

I know there’s something in the wake of your smile
I get a notion from the look in your eyes, yeah
You’ve built a love but that love falls apart
Your little piece of heaven turns to dark

Sometimes you wonder if this fight is worthwhile
The precious moments are all lost in the tide, yeah
They’re swept away and nothing is what it seems
The feeling of belonging to your dreams

I don’t know where you’re going
And I don’t know why
But listen to your heart
Before you tell him goodbye
Posted by Leo The Lioness at 4:33 PM No comments: